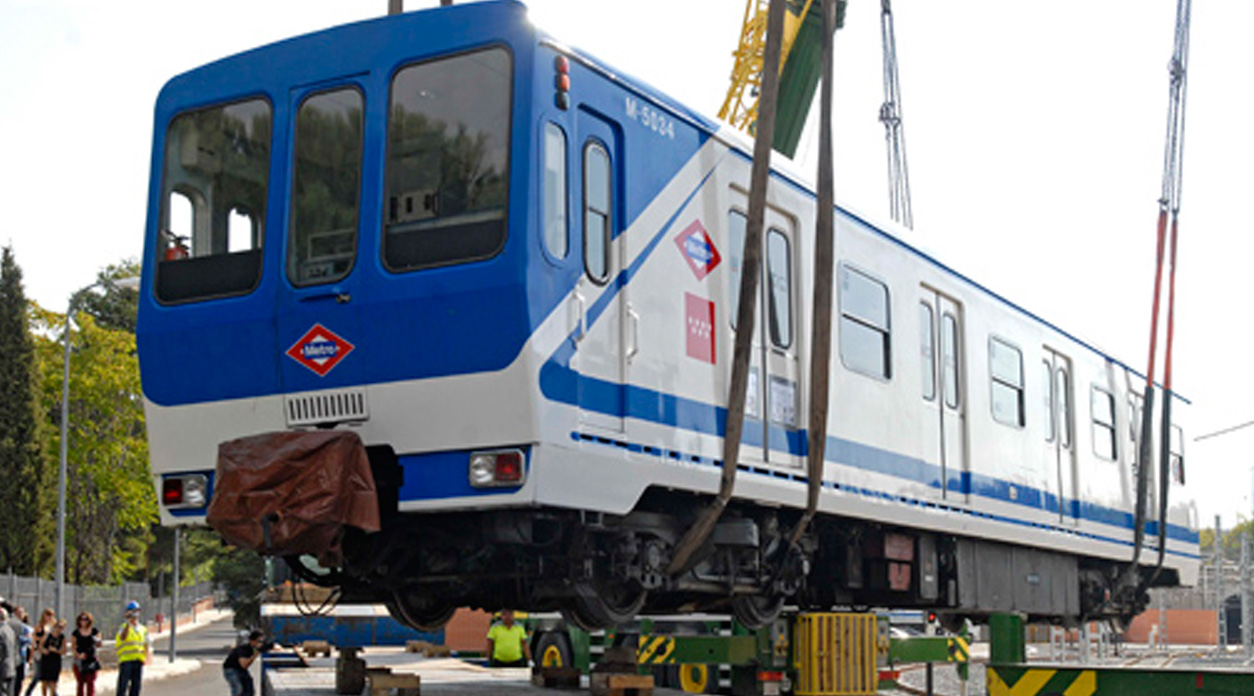 Metro is making 32.6 million euros with the third sale of trains to Buenos Aires

Metro de Madrid has obtained revenue of around 28 million euros thanks to the sale of 73 carriages from the 6000 Series to the Metro of Buenos Aires, to which is added the 4.6 million euros to be paid for the technical assistance for their commissioning in the Argentinean capital city, in what is the third sale of rolling stock to this country and the largest one performed to any Underground railway system

The backing of this type of operation, meaning an important source of revenue, along with the company’s cost cuts, has allowed prices for the public transport in the Community of Madrid to be frozen for the first time in thirty years.

This is how the regional president, Ignacio González explained it, when visiting the company’s main workshops in Canillejas on Monday, where the dispatch of the first three units in the batch of trains to the Argentinean capital city was under way. Tonight they will depart for Bilbao and then they will be transported by ship.

González indicated that this sale is a “magnificent example of the international interest that Metro de Madrid awakens, turning it into a reference point due to its commitment to innovation, service quality and control of expenditure”, and he underscored that this was the type of step that is helping Madrilenians, ensuring that they do not have to take on any more sacrifices, in this case, when paying for public transport. “I am not going to ask the Madrilenians for any more sacrifices”, the president insisted, who emphasised that in the same way water rates will not rise in price in 2014, transport will not go up either.

FROM CANILLEJAS TO BUENOS AIRES

The carriages leaving Canillejas have been completely adapted to the characteristics of the underground railway system in Buenos Aires, as is contemplated in the transaction agreed upon with Subterráneos de Buenos Aires Sociedad del Estado, SBASE. The agreement also includes the supplying of complementary services, as well as technical assistance for the commissioning of the new carriages in Buenos Aires.

In total, Metro de Madrid will receive 32.6 million euros for this operation, which is framed within the company’s efforts to improve its revenue, with the aim of cutting its financial costs for all the Madrilenians.

On this point, González emphasised the twelve million euros in savings resulting from the energy efficiency steps, the forty million euros due to capitalisations or the eleven million due to commercial revenue that will be recorded this year.

Today’s dispatch is framed within the third operation of this type carried out with SBASE, after the purchasing of two batches of material from the 5000 material in 2011 and 2012. They are carriages from the 6000 series that were used on Line 6 of the Madrilenian underground railway service and which in their new location will travel along Line 9 in Buenos Aires.

Although these carriages are fifteen years old, they are in perfect condition and provide a perfect service regarding availability and reliability ratios.

These units will be replaced on Metro de Madrid by the 7000, 8000 and 9000 series, which use more up to date technology. On this point, Ignacio González explained that the average age of the trains in Madrid (12 years), is less than the main underground railway systems in the world such as New York or Moscow and has defended the idea that no underground railway system has undertaken an extension of its network such as the one performed in Madrid over the past ten years.

The purchase of the 6000 units is complemented with the development of the maintenance work for this material, as well as a series of additional jobs to adapt the rolling stock to the operating conditions in Buenos Aires, amongst which are the adjustment of the track width and the dismantling of the signals, radiotelephone and video surveillance systems.

Once in Buenos Aires, the outer appearance of the trains will be adapted to the image of the Argentinean underground railway, the signals and radio communications systems will be assembled, as well as a revision of the components and the commissioning of the units.

The Projects Consultancy Area of Metro de Madrid is the business line in charge of collecting and processing the company’s know-how to turn it into different integrated mobility solutions and to be able to trade this in countries where it is necessary now, due to their new construction or renewal projects of transport lines.

COMMERCIAL ACTIONS ALL OVER THE WORLD

During 2013, the Consultancy Area of Metro de Madrid has taken on over 50 commercial actions in different places all over the world, amongst which those in the United Kingdom, Peru, Puerto Rico, Paraguay, Saudi Arabia, Singapore, Qatar, Vietnam or the Philippines stand out.

Some of them are still in the bidding process and others have already materialised into projects, such as the Metro de Salvador de Bahía, a project where the condition of the installations, the rolling stock and the civil building work were evaluated for the 6.6 kilometres that have already been built of the city’s first Underground Railway line.

Likewise, and as an expert in operation and railway systems, the Madrid underground railway has developed technical assistance projects for different multinational companies such as Isolux, Bombardier and Cobra within the framework of the tenders published by the Metro de Santiago de Chile for the designing, construction and commissioning of its new lines 3 and 6, as well as for the companies Cosapi, Iridium and FCC within the framework of the tenders for the design, construction and running of the line 2 of the Metro de Lima.

The business turnover for 2013 was completed with the work performed throughout the year for the design of line 1 of the Metro de Quito, the training courses for the Turkish Railways or the supervision work for refurbishments and maintenance, as well as the corresponding training in order to be able to drive the material previously sold to the Buenos Aires Underground Railway.

This year the Transcoma Group will...